The housing market has gone through unprecedented upheaval over the past year.Lockdowns brought home sales to a complete standstill, then pent-up demand and limited supply led to a once-in-a-lifetime sellers’market.

But many signs suggest the housing market could be at a tipping point. We’ve been watching the ups: and downs. Let’s dive in deeper to see where the market might be heading.

Up: Lack of housing inventory has been a growing problem nationwide, but particularly in coastal California. 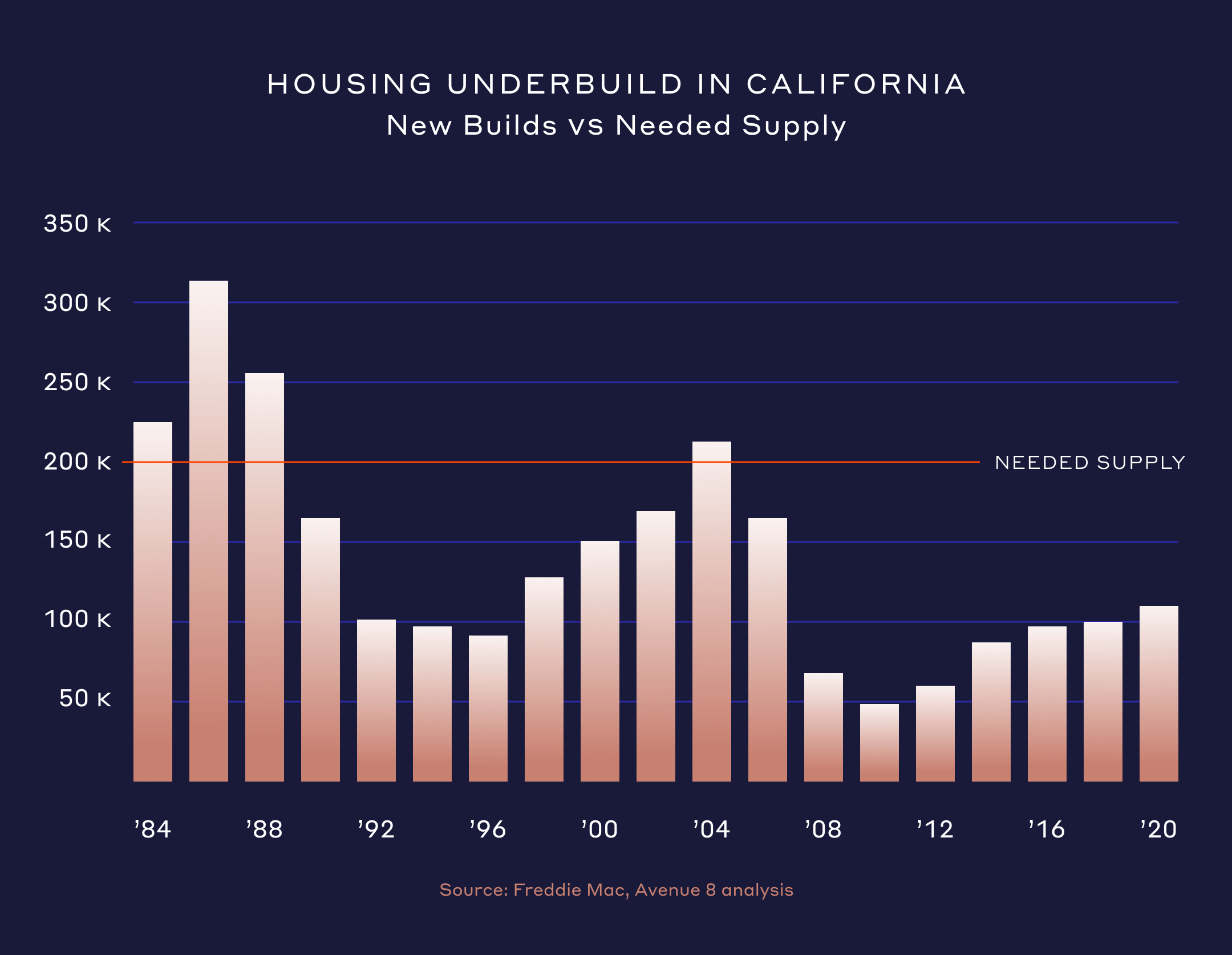 Underbuilding that began nationally after the Great Recession, and dates back to the 1990s in California, has resulted in an estimated shortage of 5.5 million homes nationwide, which will continue to drive up prices.

Up: Triple digit growth in major metros over the past year shows that cities are just as hot as the suburbs. 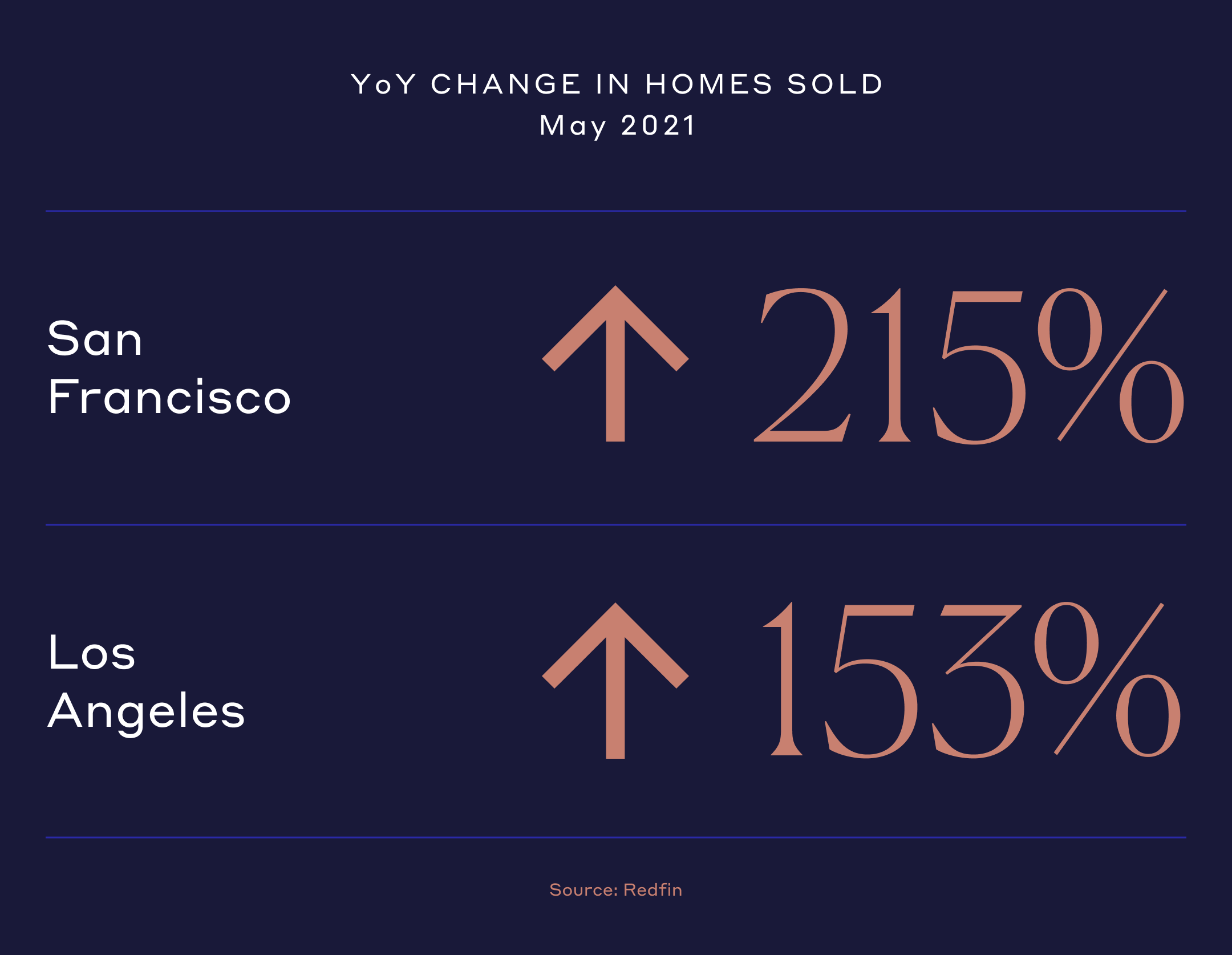 Home sales are growing rapidly in some large cities, where buyers can tap into richer cultural lives post-pandemic at a comparative bargain. 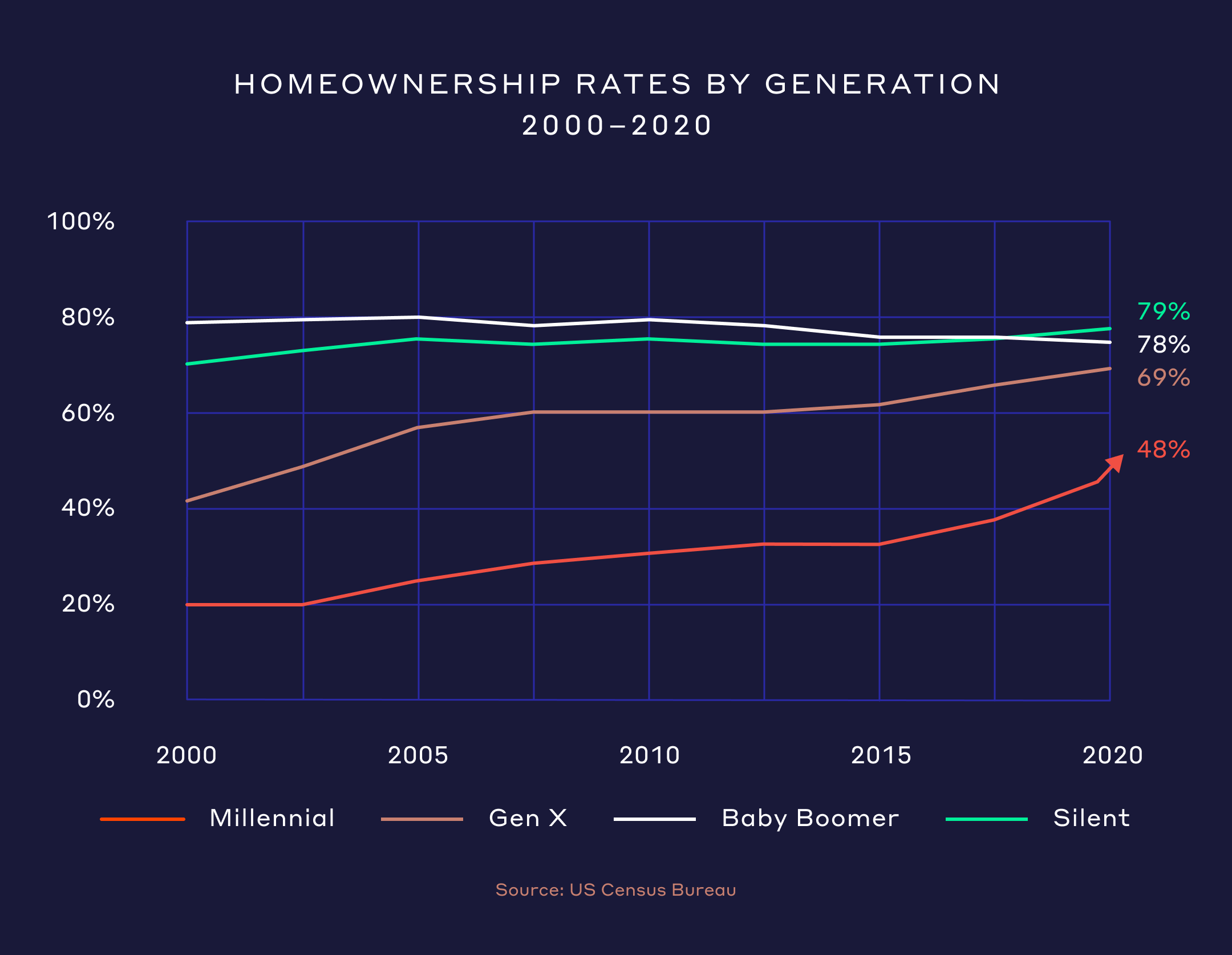 Homeownership amongst millennials grew the fastest of any generation in the past 5 years, climbing from 35% to 48%. That rate has only climbed this year, which should drive the sector for a long time to come.

Down: Buyers are wary of purchasing “at the top”and consumer confidence is dropping. 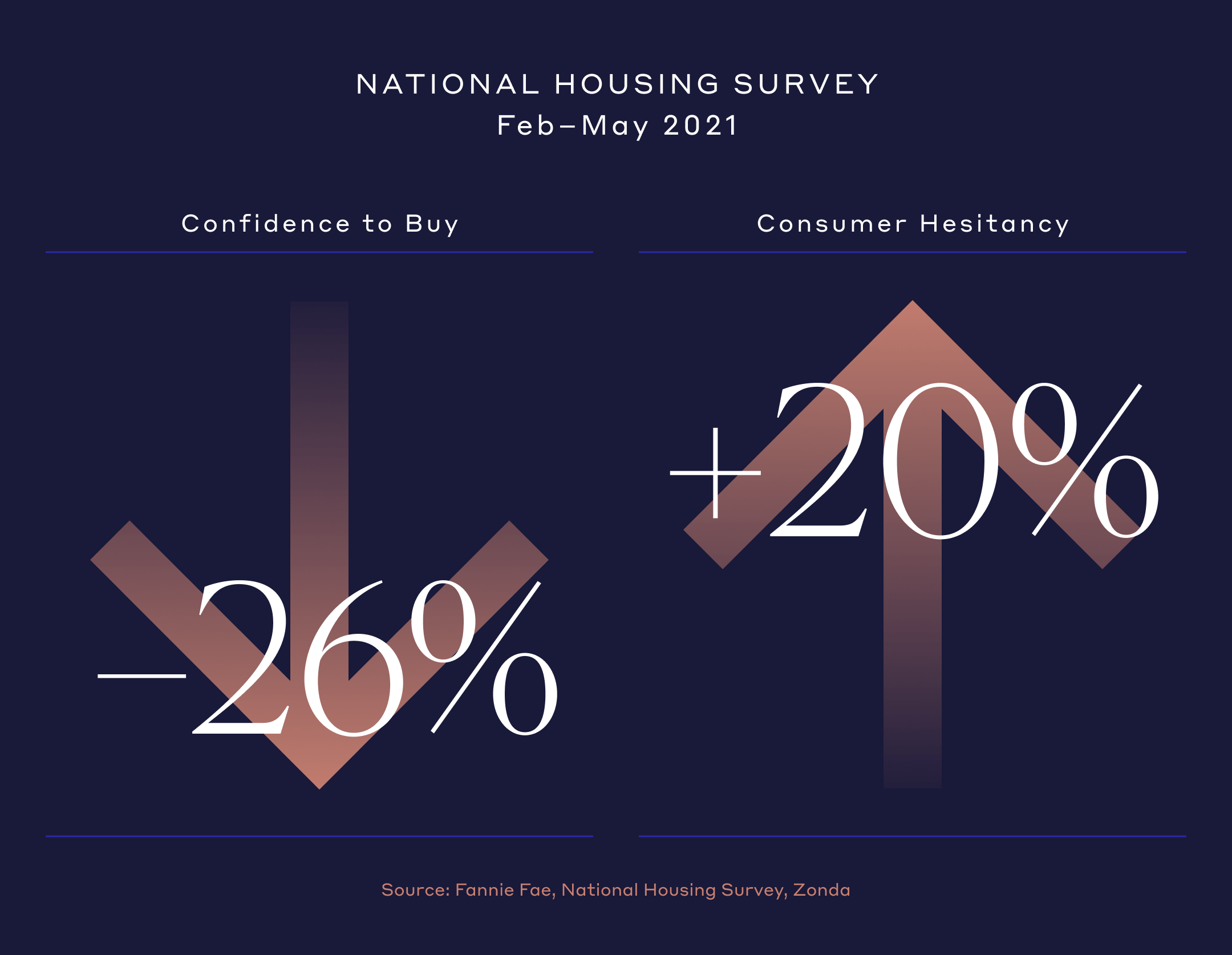 Despite continued increases in home prices, buyers are pulling back for the first time in a year — wary of buying at the peak of the market, only to see prices and home equity fall precipitously.

Down: Home price growth has leveled off in California. 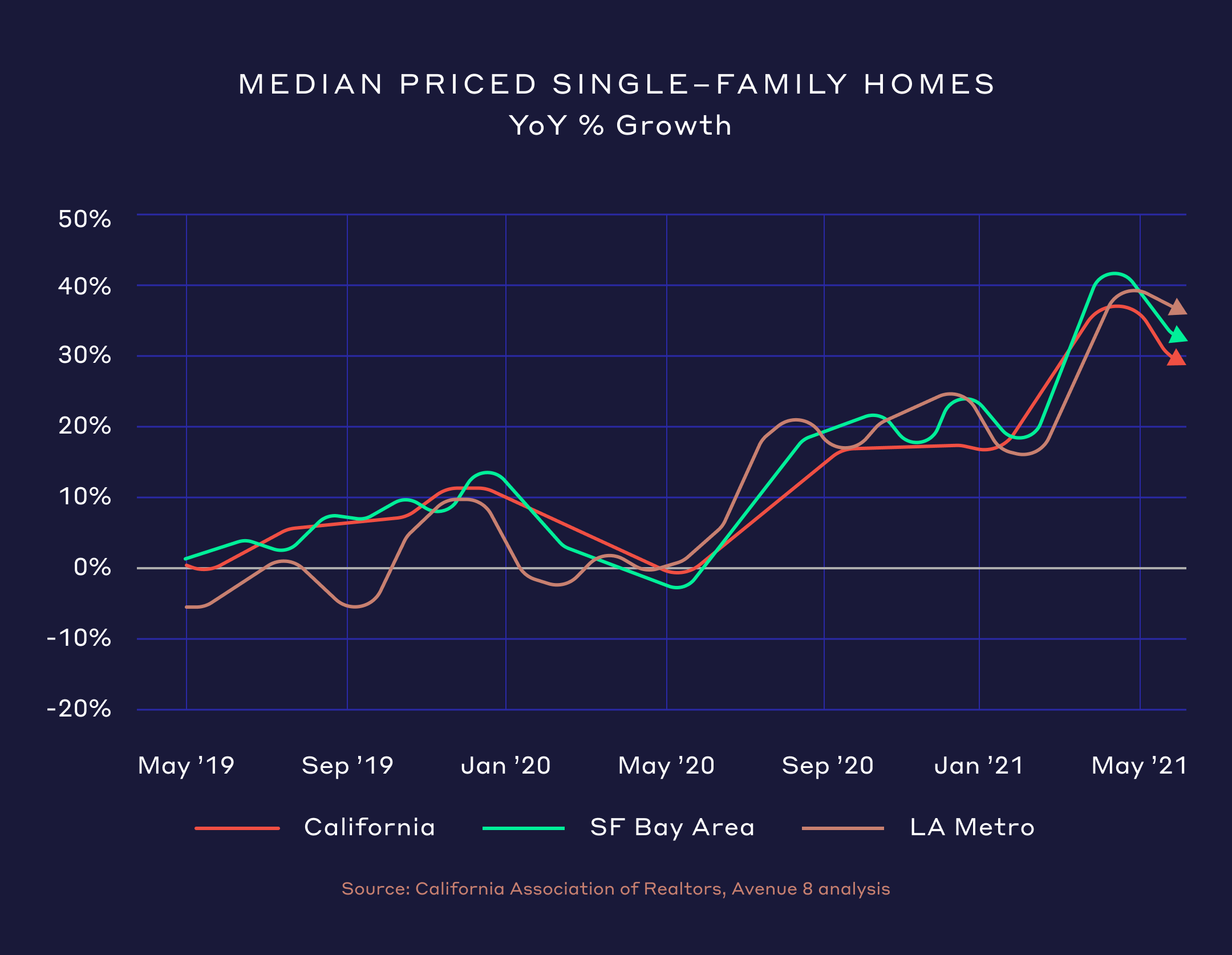 Median home prices continued to grow at a double-digit pace year-on-year well into June, continuing a trend since the end of last year. However, this growth has slowed; we may have reached the summit of a home price plateau.

Down: Buyers no longer appear to be incentivized by lower mortgage rates.

Despite the fact mortgage rates continue to be near historical lows, even falling in the last two weeks, the number of mortgage applications has decreased to the lowest levels since the pandemic started. This is an indicator that demand for homes is waning.

Whether up or down, it’s clear real estate as an asset class has outperformed over the long term. 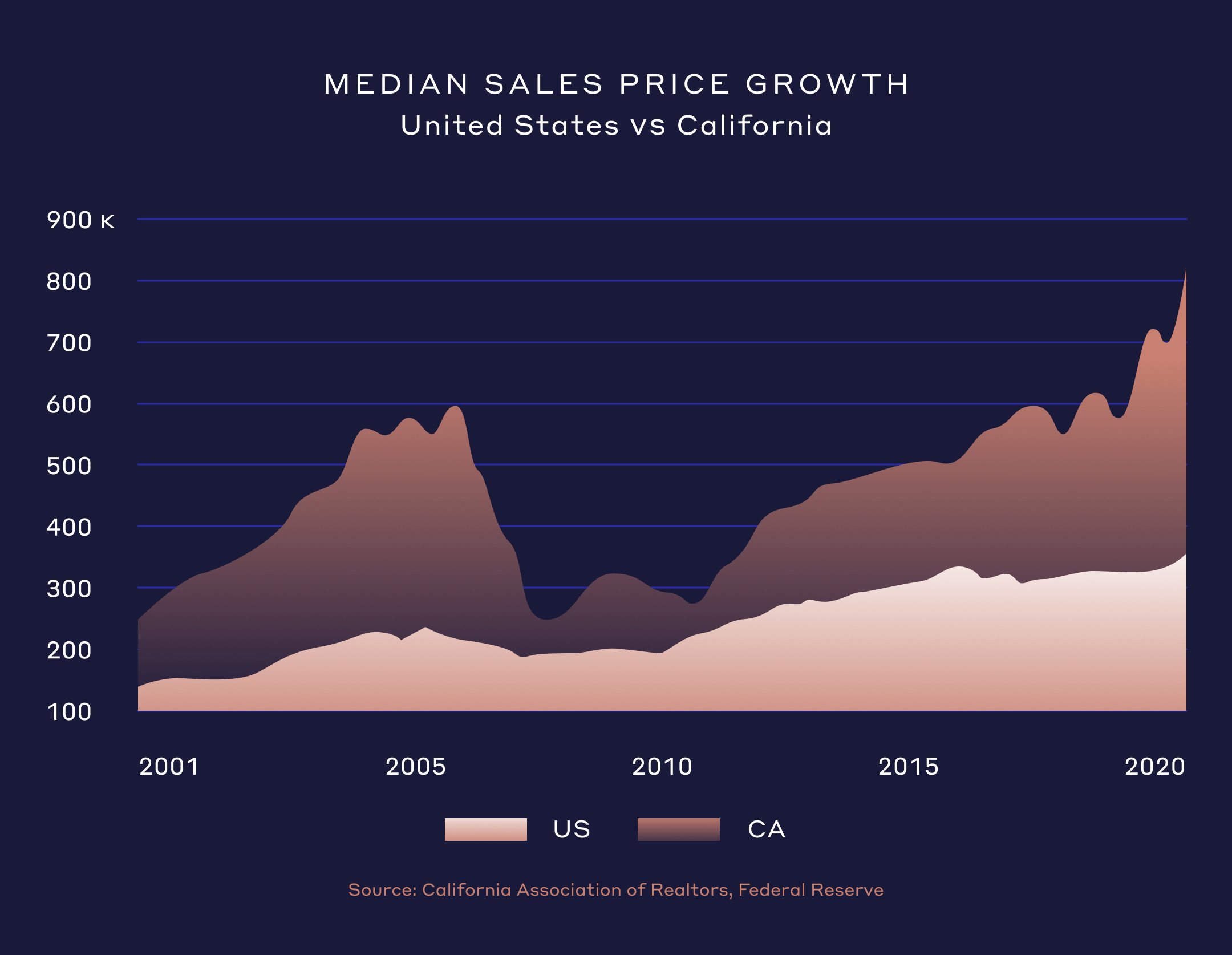 Even counting for the plunge during the Great Recession, home prices have risen considerably over the last two decades.

Despite historical performance, consumer curiosity that we’re heading toward a tipping point has reached an all–time high. 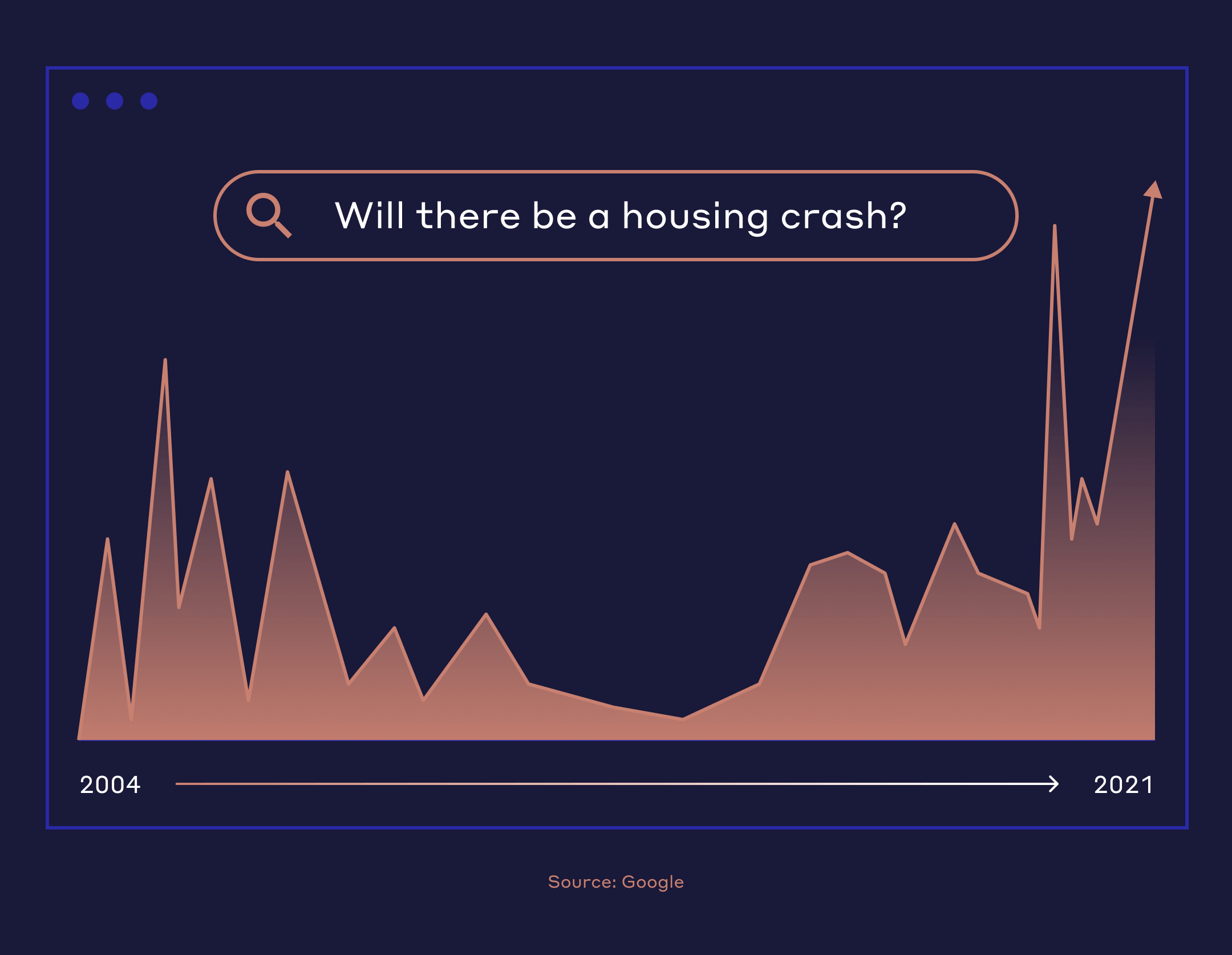 But economists point out that current market conditions are nothing like they were in 2008: Instead of an oversupply, we have a historic shortage of housing inventory, and loans are much harder to get. In short, a housing bubble is unlikely.

So, which way will the market tip? Almost no one predicted the magnitude with which the housing market took off post-pandemic. The trajectory can be partly attributed to something that’s tricky to forecast — human emotions, namely a deeper attachment to the home. What we can say for sure is that we are in new territory, but we at Avenue 8 feel more excited than fearful about the future of the housing market. Whatever happens, we will be sure to report back on future editions of The 8.